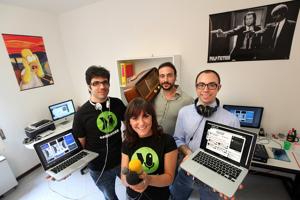 Spreaker, an Italian start-up who took part in the January 2010 edition of the Intesa Sanpaolo Start-up Initiative, has reached a funding agreement with Italian Angels for Growth, who will invest € 250.000 as part of an €300K funding round.

Spreaker is a Social Web Radio, allowing users to build their own radio programming – be it music, news or spoken word. Listeners can then access the broadcasts live on the web or download them in podcast form. Dedicated mobile apps ensure on-the-go access to the service, and a social layer allows for easy sharing and personalization of each user’s listening habits. Spreaker, founded in Bologna by a team of engineers led by Francesco Baschieri, launched a beta version in early 2010, and has already reached over 200.000 community listeners and 10.000 broadcasters.

Italian Angels for Growth (IAG), founded in 2007, is Italy’s largest network of individual business angels, counting over 60 members. They focus on the early-stage end of the value chain, and currently has a portfolio of 8 investments (including Spreaker).

To celebrate the founding round and to announce the official platform launch, the Spreaker team will host an opening party scheduled for October 20 at The Hub in Milano.