In Memory of Gabriele Corbelli 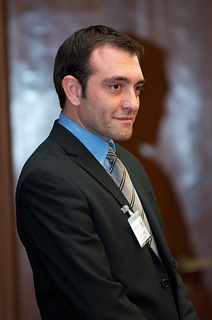 Gabriele Corbelli was one of the co-founders of WISE, a nano-biotech start-up who developed an elastic metallized polymer for use in stretchable neuromodulation leads (with applications in the diagnosis and treatment of neurodegenerative diseases like Alzheimer's). The WISE team had already taken part in the Nanotech Start-Up Initiative last November, where they had won the Nanochallenge prize issued by Veneto Nanotech.

Gabriele, together with his friend and co-founder Luca Ravagnan, was scheduled to pitch at the Biotechnology Start-Up Initiatve / BioInItaly scheduled for April 18. Only, that is not what happened: during the night before the event, Gabriele passed away in his sleep, probably due to a stroke.

He was only 31 years old, and driven by a strong passion for innovation and technology which, he dreamed, could help improve the lives of neuodegenerative disease patients worldwide.

It is a moment of grief and astonishment for all of us who met him: we are close to his mother and his team members.

In his memory, a minute of standing silence was observed during the Biotechnologies Investor Arena Meeting. BioInItaly organizing partners Assobiotec and Innovhub decided that, starting next year, the award for the best biotechnology startup will be dedicated to his name. This year's award (consisting in travel & accommodation expenses for one of the upcoming Start-Up Initiative international roadshows) went to Naicons, a drug discovery engine start-up developed by veterans of the Vicuron acquisition by Pfizer. However, the BioInItaly commission decided to duplicate the prize and assign it also to WISE, who was a very strong performer in the selection phases.